Devotional: But in the future 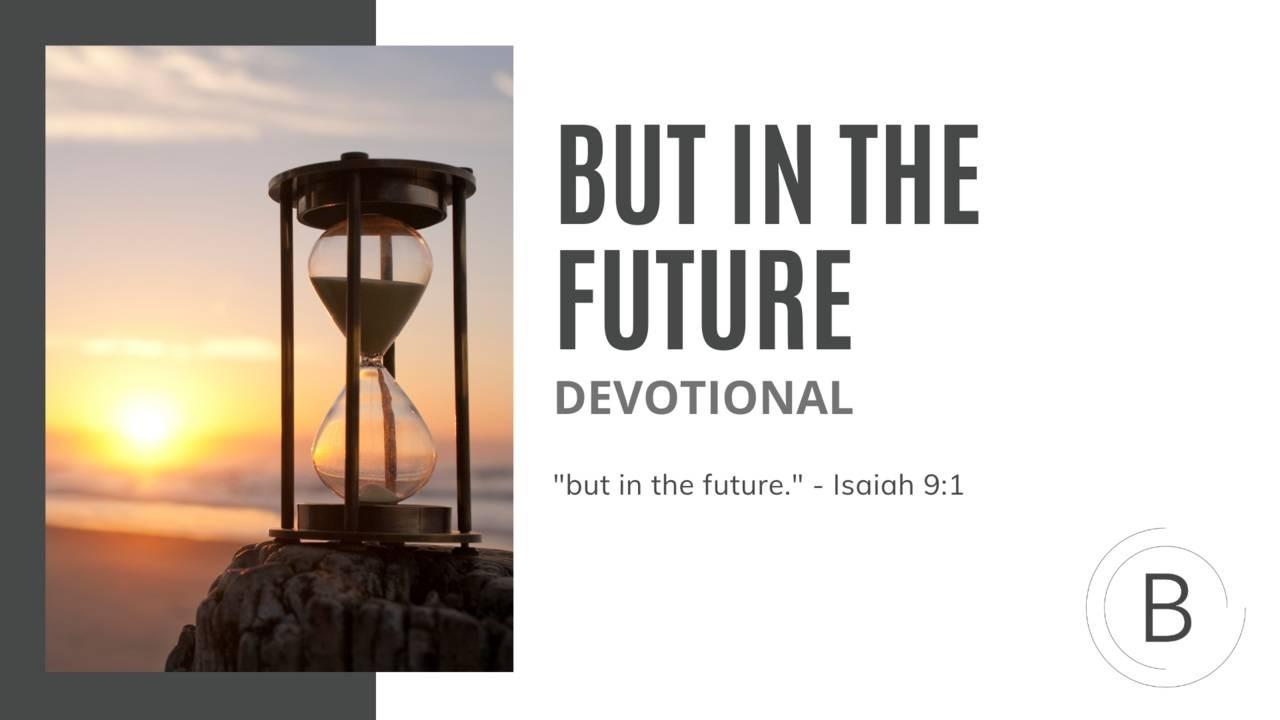 but in the future Isaiah 9:1

I was reading Isaiah 9 and felt it had strong relevance to the challenge we see of getting people out of the common way of doing Christianity and into a kingdom walk. The big hurdle of “recruiting” people for this or that initiative has little to do with leave, time commitments, or finances; it has to do with the possible new future for people, and how our enemy is determined to help people avoid it. The two phrases that hit me from Isaiah 9:1 were “In the past…” and “but in the future.”

As we end another Venture season (which feels much like the Old Testament times when kings returned from war) I am so blessed that the future of many people has been radically changed by God’s interjection these past four or five months. The future of many consultants has been changed forever because of the training they received. They grew spiritually when they had to serve clients in a way that went beyond their skills or gifts. Consultants built spiritual capital as they obtained their own story of God’s miraculous workings. As one returning consultant said, “Now I have my own story to tell.”

As I look back at our returning teams I see that some of the consultants were at a junction when they chose to do the rēp training, but they did not know it at the time. For them it turned out to be a decision of whether they would fulfill their destiny, slip into mediocrity, or in some cases, have their future wrecked. This sounds dramatic because it is. Many have been clutched from a life of corporate drudgery and are now ruined for good. Some have been spared from disastrous relationships or partnerships. They have, quite literally, a new future.

but in the future

Some consultants I know got to the “future” because of the intervention of friends. Nicole, for example, emailed 23 of her friends and said, “I believe one of you should go through rēp training and go on a Venture, and I will pay for you to go.” Two weeks later she emailed her friends again and said, “I have not heard from any of you yet…” and Sandra soon raised her hand and signed up for the training. Sandra said, “Both of her messages hit me like a stone and I realized I was really being called. I deleted the first one (as the good Jonah that I am) and when the second one came, I knew it was time to go.” Hardly an over-eager recruit. But four months later, Sandra was an empowered marketplace minister. She has spiritual children in South Africa and has become a prayer partner with her client, business leaders who now impact 50,000 people in their household. One person, in this case Nicole, persisted with her friends. Sandra heard the call, served a couple whose marriage was saved (thereby impacting their kids forever), whose business is being transformed, and whose sphere of influence is being impacted by the kingdom. Already three employees have received Christ. Well done, Nicole, way to go, Sandra… and Yay God!

You too have it in your power to change someone’s future. Whose lives will you impact? Are you content to go back to your desk after your adventure without ensuring that you have mobilized two or three people to replace you? This is the season to help start a new future for another consultant, their client, and the household of that client. Remember Paul’s advice to “redeem the time (kairos—season) for the day’s are evil.”

I want to challenge you to actively ask God to place on your heart two or three people for whom you can pray, whom you can pursue and urge to begin the kingdom journey on which you yourself have embarked. May God honor you for your efforts, and may he give us no rest until we see our friends and acquaintances thrust on the kingdom road, just as we have been.