Is Covid your ticket out of Egypt? 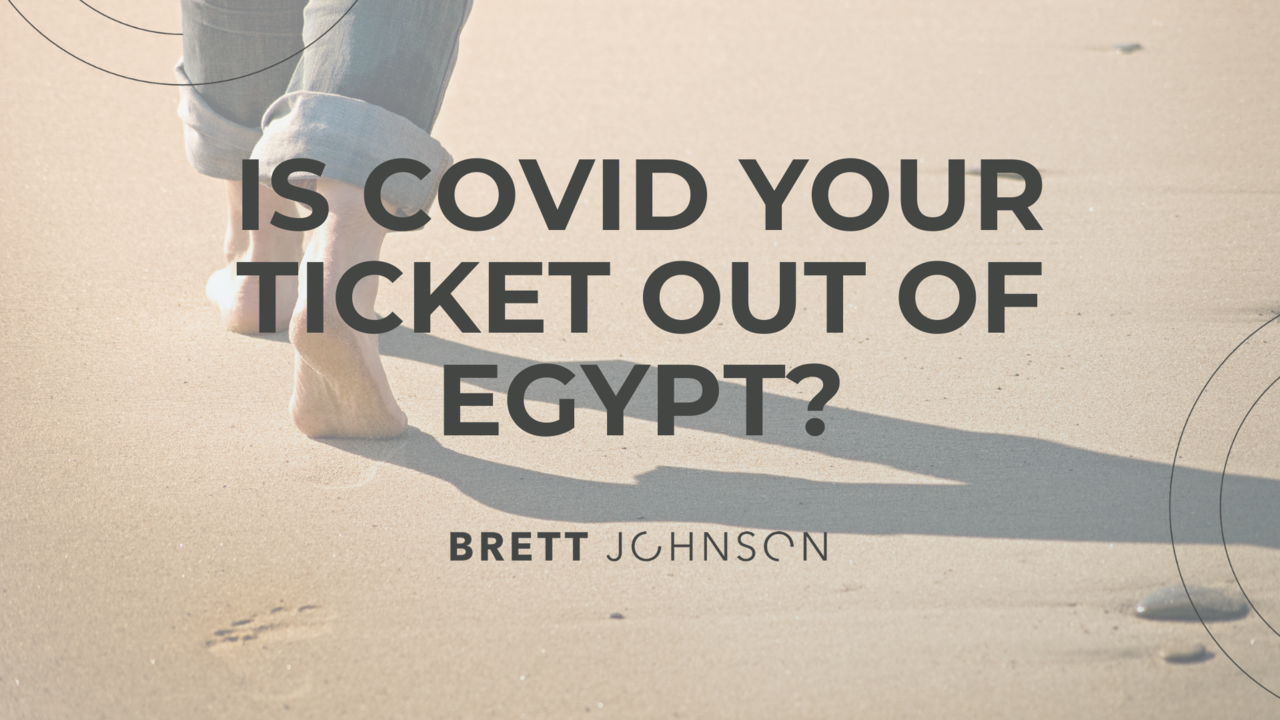 Let’s face it, we often only leave a place of comfort when we are prodded, pushed or shoved. Most people have some resistance to change and stay in bad situations rather than to face the unknown. This is not true for everyone, but articles abound on why people say “the old is better.” The nation of Israel had arrived in Egypt hundreds of years prior and their temporary escape from famine-ravaged Canaan led to them falling in love with garlic, leeks and sunset cruises on the Nile. 350 years later a handsome young fellow was born, but things had started to get a little nasty for Jacob & Sons in North Africa. Infanticide was Pharaoh's latest trick to control the Jewish population; this was followed by slavery and hard labor. You would think people would rush for the EXIT sign, but they didn’t.

“Therefore, tell the Israelites, ‘I am the Lord. I will bring you out from your enslavement to the Egyptians…’ but they did not listen to him because of their discouragement and hard labor.”

Fast forward: 10 plagues later the nation of Israel finally takes the desert offramp, goes through the Red Sea tunnel, and is picking up momentum. They have an army, some level of order, and Moses is about to give them an economics lesson. I’m paraphrasing what Moses said in Deuteronomy chapter 11. “Let’s chat about the economy of the new nation we are going to establish. There’s good news and bad news: the good news is, all of you get to have a piece of land (except the priests, but that’s another story). The bad news is this: there is no river Nile. Until now you have had it easy: you laid out your vegetable patch and pumped a little water from the Nile and, hey presto, you had income! You didn’t have to rely on God. In fact, some of you, like the Egyptians you grew up with, have made a god out of the Nile.”

“For the land where you are headed is not like the land of Egypt from which you came, a land where you planted seed and which you irrigated by hand like a vegetable garden. Instead, the land you are crossing the Jordan to occupy is one of hills and valleys, a land that drinks in water from the rains, a land the Lord your God looks after.”

In recent years there seems to have been an inverse relationship in Western nations between our standard of living and our clarity of conviction. The better we have it, the less we are prepared for it. Mario Murillo said we have created “high maintenance, low impact” christians in America through the preaching of cheap grace. Many of us want the certainty of Egypt’s income stream (the Nile) and the autonomy of the Promised Land (property rights) without the conditions for living that come with the Promised Land. Here are the conditions:

“Now, if you pay close attention to my commandments that I am giving you today and love the Lord your God and serve him with all your mind and being, then…”

To be fair, we are smart enough to read the fine print and we know that Promised Land living demands faith and obedience, a whole-hearted loving and serving. We therefore opt for the predictable, secure, safe work situation, and we remain in Egypt’s economy. The global pandemic should be giving us pause to ponder whether this is where we want to spend the rest of our careers, however. Is the work we do, the way we do and, more important, who we are when we do it, all that it is cracked up to be? I am not advocating everyone leave their corporate employment. Joseph had a job to do there; Moses understood the system well. It’s just that God has a better system. You can be a new person working inside a bad system if that is where God has you. For some, however, the Spirit might be saying, “The gig in Egypt is over. It is time for you to live in a new economy.” The plague could be your plane ticket out of Egypt. The global pandemic might be used to spotlight the invitation we have to a higher level of co-laboring with God.

“…then he promises, “I will send rain for your land in its season, the autumn and the spring rains, so that you may gather in your grain, new wine, and olive oil. I will provide pasture for your livestock and you will eat your fill.”