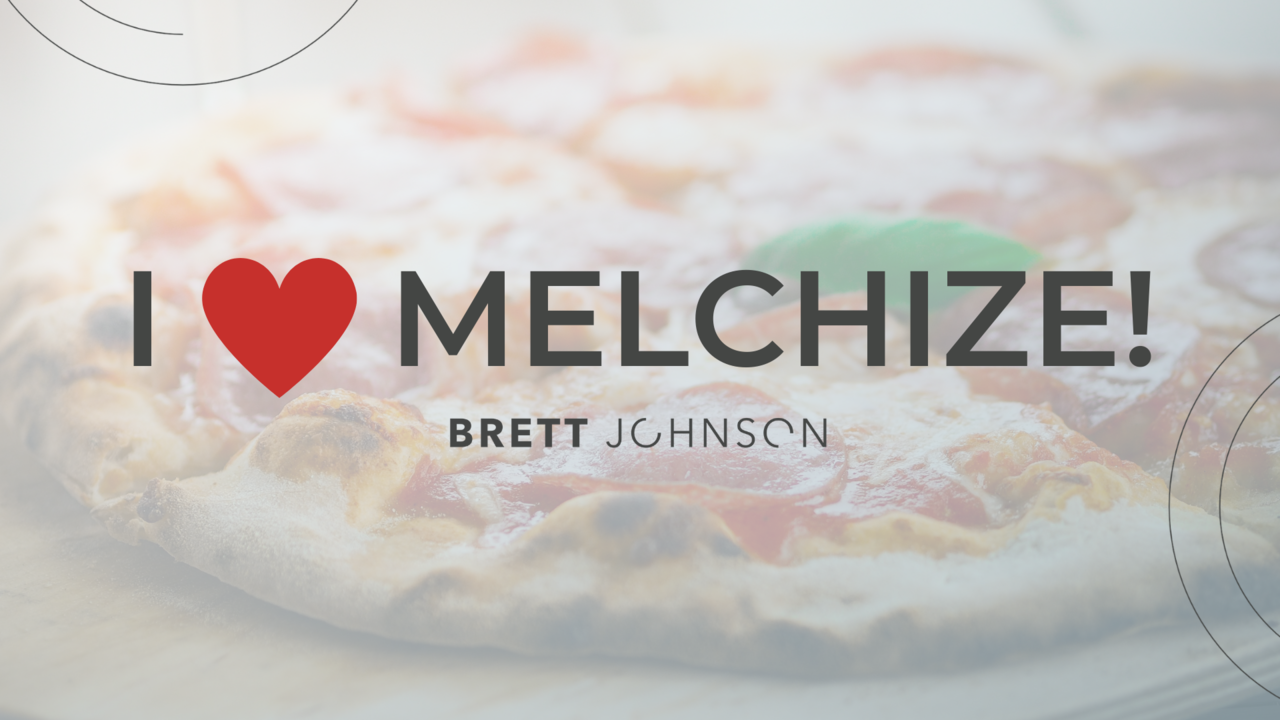 Some years ago we started spending most of the year in a coastal town called Melkbosstrand just North of Cape Town. A local pizza eating spot is called I Love Melkies and their sticker can be seen on cars in the area.

I think it is time to bring out an “I love Melchiz” sticker. Truth be told, Melchi of the Old Testament has one of those names it is easy to gloss over. He pops up obscurely then disappears into the background for about 1000 years until David gives him a fleeting mention. Then Melchi seems to vanish again until the book of Hebrews unpacks his significance.

This Melchizedek was king of the city of Salem and also a priest of God Most High. When Abraham was returning home after winning a great battle against the kings, Melchizedek met him and blessed him. Then Abraham took a tenth of all he had captured in battle and gave it to Melchizedek. The name Melchizedek means “king of justice,” and king of Salem means “king of peace.” There is no record of his father or mother or any of his ancestors—no beginning or end to his life. He remains a priest forever, resembling the Son of God.

Melchizedek was an international man of mystery until Hebrews unpacks his significance.

Jesus became a priest, not by meeting the physical requirement of belonging to the tribe of Levi, but by the power of a life that cannot be destroyed. And the psalmist pointed this out when he prophesied, “You are a priest forever in the order of Melchizedek.” Yes, the old requirement about the priesthood was set aside because it was weak and useless. For the law never made anything perfect. But now we have confidence in a better hope, through which we draw near to God… because Jesus lives forever, his priesthood lasts forever. Therefore he is able, once and forever, to save those who come to God through him.

This phrase “king of the city… and also a priest of God Most High” is important. This “order” predates and outlasts the old Jewish system and forms a foundation for marketplace-based followers of Jesus to rediscover their intended dual identity. We are kings and also priests. Sometimes those who propose separating one’s work and calling, vocation and avocation, do so from ignorance. Others are clinging to the dead idea that only some people are priests. Isaiah 61:6 says “You will be called priests of the Lord, ministers of our God. You will feed on the treasures of the nations and boast in their riches.” This was not achieved by making us Levites but by drawing us into a higher order priesthood, that of our friend Melchizedek. Said another way, if you are a disciple of Jesus but still advocating that there is a separate and more spiritual group of ministers—pastors, priests, ministers, whatever—then you are stuck in the law, living in the wrong era, on the wrong bus. If you, like more than 90% of the rest of us, work a regular job, it is not a regular job: it is your ticket to being a king and a priest.

Live who you are.

PS: Some say Melchizedek of the Old Testament was an early appearance of Jesus… just in case you were worried about that “I love Melchiz” sticker.