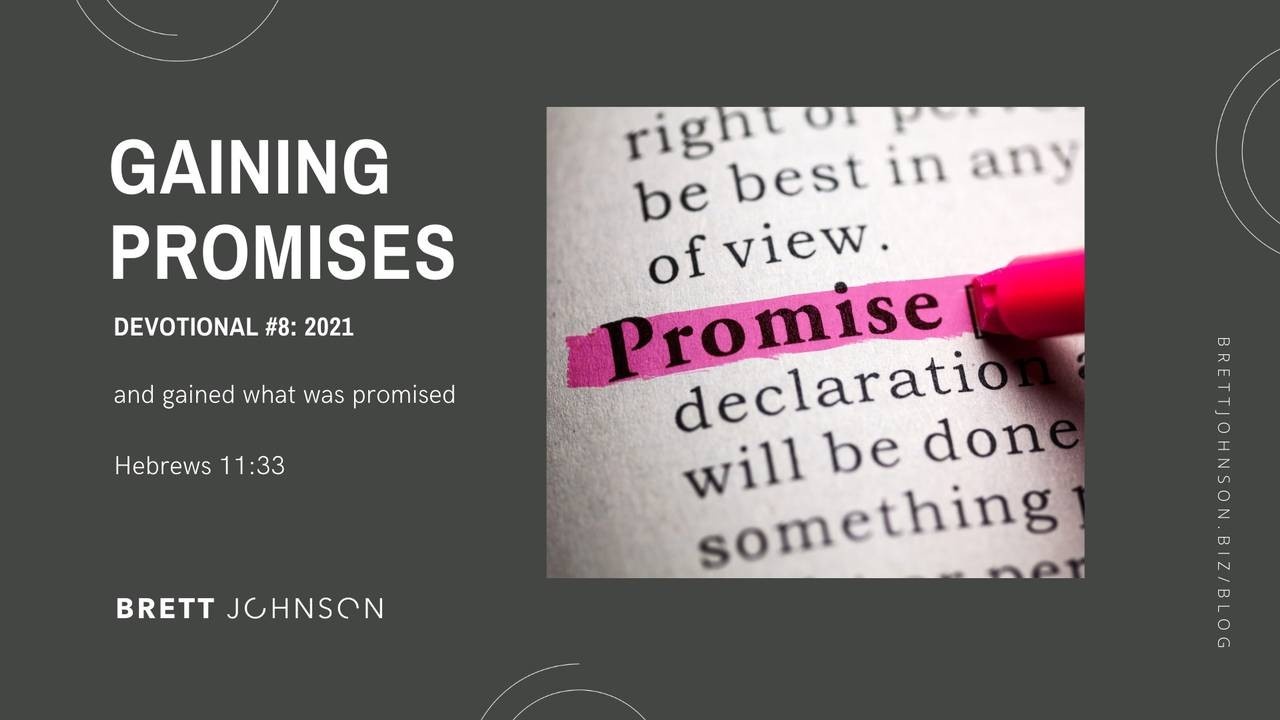 and gained what was promised
Hebrews 11:33

Hebrews 11 lists the accomplishments of great heroes of the faith. This phrase in verse 33 challenges me: “and gained what was promised.” The principle is that what has been promised still has to be gained. I know that this is obvious, but when I read this I confessed to God that I had been passive. “If God said it, I will wait to see it happen, but there is not much that I can do to make it happen.” On the one hand, just waiting is very realistic. There is nothing I can do given the magnitude of the things God has promised. On the other hand, this verse tells me that people of faith somehow “gained what was promised.” So I reflected on the things that I am pretty sure God has spoken to me, and spent time praising God, thanking him for what he had promised.

The second aspect that was highlighted to me is the source of the promises overshadowing the content of the promises. I acknowledged and spoke out that the promises came from God’s large heart toward me, and I opened my heart to receive them. It was, for me at least, a new level of belief. It took the intellectual assurance I had of his promises and said, “God, you made the promises, not me. These are your ideas, not mine. And you will bring them to pass, not me. They are outrageous, and only you can do them. But I stand here to do my little part which his to praise you and to say in faith that I am gaining that which you promised.” The heavy lifting is all God’s, and he somehow still gives us only a little part to do.

A third facet of “gaining what was promised” is beginning to walk in the direction of the promises, or starting the work embodied in the promise. Noah was promised salvation for him and his household—but he still had to do some work. Work done in faith is faith made visible.

Finally, when we put ourselves in the mode of actively gaining what was promised, it increases our capacity to receive. It is hard to explain, but somehow this shifts us from accidental faith to deliberate faith. For me there was a shift from the receiving of these things being “if he wants, it will happen” or “if I screw up enough faith it might happen” to “he made the promise, he is faithful, it was his idea, not mine, so I will stand expectant, praise him, expect the best of him, and gain, by faith, that which he promised.”  There is a fine line between the two. It is not about “name it and claim it” as some might argue. In real faith endeavors we are not the ones who name it. “Faith comes by hearing, and hearing by the word of God.” But even after God has ‘named it’ we still have to “gain what was promised.”