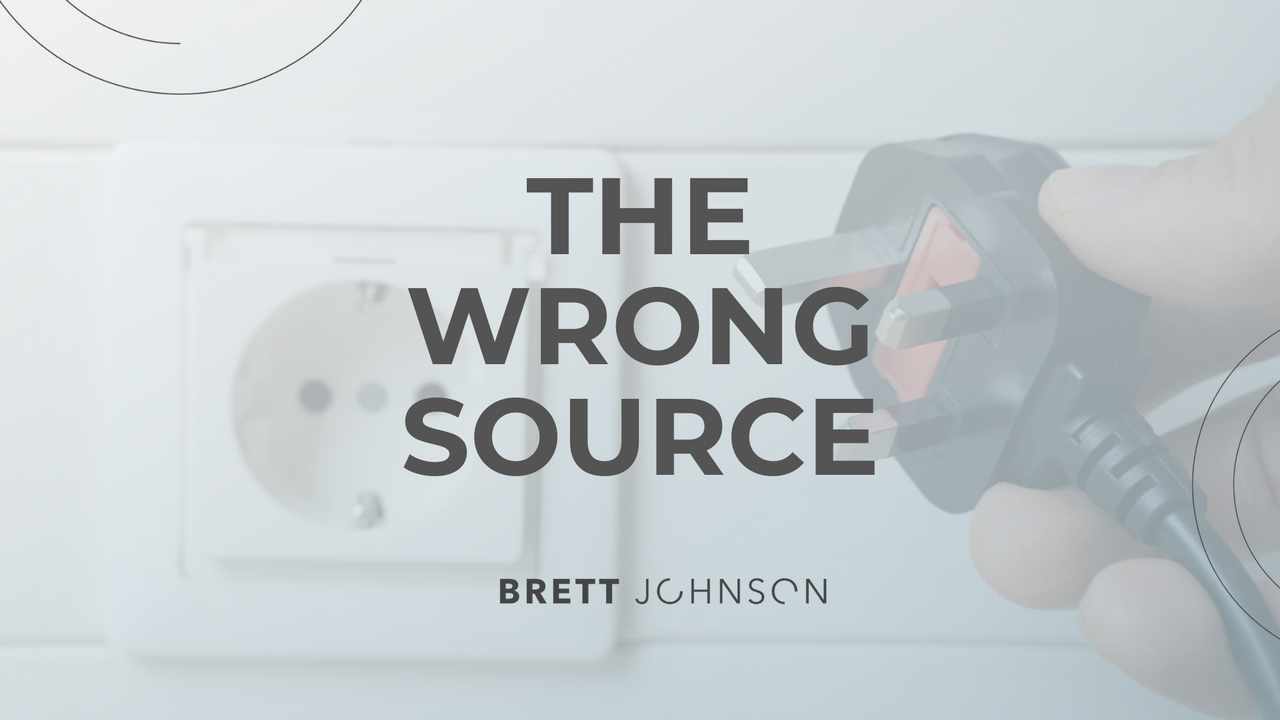 It was May 2005 when I participated in a conference in Jakarta, Indonesia. It was my first visit there and the event was broken into the typical tracks such as church, youth, education, government and so on. Graham Power, Ed Silvoso and I were leading the Business Track. In a pre-conference workshop I told the other track leaders, “Thank you very much! I am the only person leading a track that has a named demonic spirit in charge… Mammon!” Peter Wagner was in our group and said, “This changes everything.” I knew something of what we were up against in the world of business… but I was wrong that our track was unique.

This is nothing new. In the letter to the Corinthians the apostle Paul uses the phrase “stronghold” which might describe a hothouse of tangled weeds that can be found in the middle of an otherwise good pasture. This “stronghold” phrase is unpacked: “we refute arguments and theories and reasonings and every proud and lofty thing that sets itself up against the [true] knowledge of God…” (Amplified Bible) The Message says it this way: “The tools of our trade aren’t for marketing or manipulation, but they are for demolishing that entire massively corrupt culture. We use our powerful God-tools for smashing warped philosophies, tearing down barriers erected against the truth of God, fitting every loose thought and emotion and impulse into the structure of life shaped by Christ. Our tools are ready at hand for clearing the ground of every obstruction and building lives of obedience into maturity.”

Being a businessperson for over 40 years means I am somewhat practical and not inclined to paint a spiritual complexion on everyday problems. I don’t use the “this spirit” or “that spirit” language loosely. I have come to see, however, that there are other “wrong spirits” that seek to be in charge of the various domains, spheres or sectors of society which rightfully belong to Jesus. Truth-denied creates a vacuum soon occupied by error in numerous disguises. John writes, “Dear friends, do not believe every spirit, but test the spirits to determine if they are from God…”

It is shocking to see so-called evangelical Christians strike deals with political parties in various nations with little discernment of the spirit behind the party or candidate. In an earlier blog I spoke to the need to understand the platform underpinning the party; this only helps when you discern the spirit fueling things. 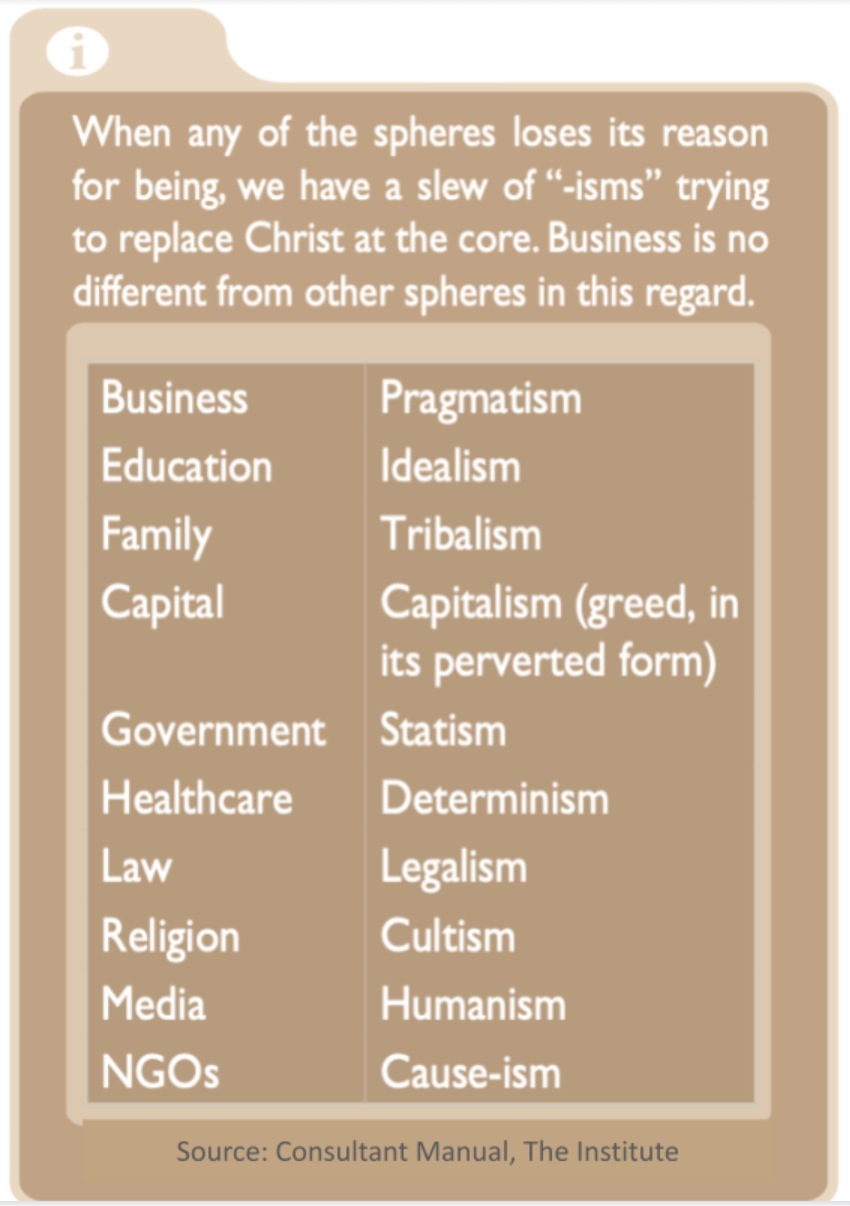 “Oh, no single piece of our mental world is to be hermetically sealed off from the rest, and there is not a square inch in the whole domain of our human existence over which Christ, who is Sovereign over all, does not cry: ‘Mine!’”

In the Repurposing Business training we point out the tendency for every sphere of society to try to occupy center stage. When this happens, the results are a series of “-isms” that twist society away from its original design. When Business plays god it espouses pragmatism. When Healthcare sits in the god-chair it wants to determine who lives, who dies, who gets healthcare and who is not worth it… Determinism. Are we not sick and tired of politicians and healthcare experts telling us that what they are doing is “science” when it is more often than not the manipulation of information for their convenient purposes? When a society thinks it is too sophisticated for God it is on a collision course with disaster.

We are currently taking our first batch of world changers through the Transforming Society training. I don’t claim this lightly; my expectation is the forging of a band of kingdom advancers who will do mighty exploits. To bring about change in society, however, one has to be acutely aware of distinguishing the real from the counterfeit, particularly when it comes to the spirit behind things. Again, I was wrong in what I said in Jakarta because, while not specifically named, there are spirits at work in each of the sectors in society. Mammon means “greed deified” and many Christian businesspeople may have a heart for God but are ruled by greed. This evidences itself in fear, stinginess, control and over-stewardship… to name just some outcomes. The right endeavor fueled by the wrong spirit will not produce the proper fruit.

The realm of Religion has its issues as well. Organized religion may start with noble intent but easily gets overrun by a “religious spirit.” Please note: I am generally allergic to labeling anything as this or that ‘spirit.’ That said, the set of false religious ideologies (whether mental constructs or demons from the pit) is one of the key issues Jesus had to contend with in his time on planet earth. Today the religious spirit respects no denominational boundaries.

The political spirit is to Government what the religious spirit is to Church/Religion. In parallel, the political spirit is to Government what Mammon is to Capital. Jesus was assaulted by humans who were soaked in a religious spirit and fueled by a political spirit. Even Pilate saw it clearly. “Do you want me to release to you the king of the Jews?” asked Pilate, knowing it was out of envy that the chief priests had handed Jesus over to him. (Mark 15:9) As we venture into towns, cities and nations to fulfill our mandate of making disciples of all nations we must beware of those that would coopt us into their corrupted purposes.

What is this political spirit, and how does one see it, avoid it and counter it?

Before we get too pointed in observing what is wrong with others, let us remember what the famous Russian author said:

“The line separating good and evil passes, not through states, nor through classes, nor between political parties... but right through every human heart – and through all human hearts.”  Aleksandr Solzhenitsyn

With that caveat, here are some hallmarks of the political spirit:

How to spot the political spirit

The political spirit in the Old Testament

Moses and Aaron had the unenviable task of telling a powerful political leader that there were limits to his control over a large swath of the people in his country. In the case of Pharaoh versus God’s people the political leader did the following:

In another Old Testament example, the case of Saul versus David, we see how King Saul:

In the classic case of Absalom versus David there are many evidences of the political spirit running amok – here are just a handful:

The political spirit continues to the New Testament

Perhaps the clearest case of the modus operandi of the political spirit is seen in the fake trial of Jesus.

Today there is a denying of truth, an ignoring of facts, a redefining of history… a brazen thrust to recast things in a way that suits one’s ideology, regardless of facts. This is not just the result of a political leaning, but the progression from tolerance to tangled-thinking to deception. Deception once embraced is passed on quicker than a virus.

Businesspeople either bow to the lordship of Christ over their business, or they bow to the god of greed. Capital Markets leaders are either stewards of God (“the gold is mine, the silver is mine”) or servants of Mammon.

The political spirit will disavow legitimate authority in order to preserve itself: remember Pharaoh, Saul, Absalom and the religious leaders. This is an issue that supersedes political parties. Politics is spiritual, just as business is spiritual. Politicians either bow to the Spirit of God or they are susceptible to the wrong spirit… the political spirit. We have long seen politicians turn their back on God; today it seems we are in an era when they feel the audacity to shake their fists at Him. If we are people who are called by God’s name to further His purposes we have to beware of operating in any spirit that is contrary to the Holy Spirit.